Melting pot: Delhi’s only synagogue, a study in faith 

“The interfaith study centre was set up to find commonalities between religions. At any given time, there are about three to four students at the Centre, both from Delhi and abroad,” said Malekar. 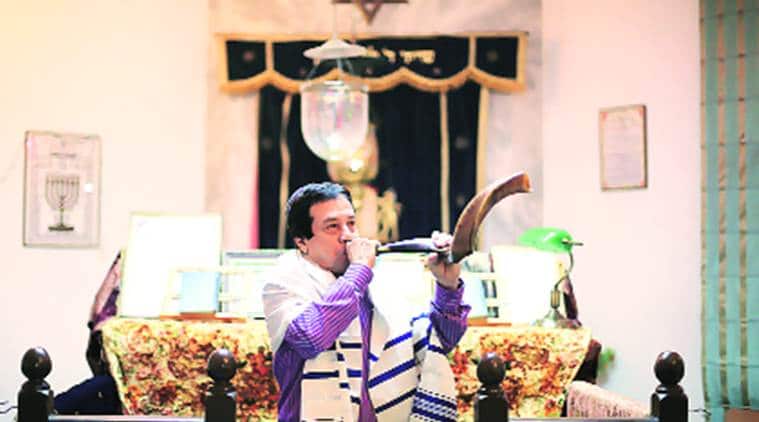 Behind the navy blue gate on Humayun Road, Ezekiel Malekar, Delhi’s only Jewish rabbi, holds up his Shofar (ram’s horn) and blows into it.  He points to the horn, brought from Israel, and says, “It’s just like a shankh (conch) that one blows into during Hindu ceremonies. The Shofar is blown on Rosh Hashanah (new year’s day) and Yom Kippur (day of atonement).” He stresses on the similarities between various religions that form the premise of the Centre for Jewish and Interfaith Study, set up in the library and the community hall at the Judah Hyam Synagogue.

“The interfaith study centre was set up to find commonalities between religions. At any given time, there are about three to four students at the Centre, both from Delhi and abroad,” said Malekar. With the Centre for Jewish and Interfaith Study taking shape under its roof, books like the Bhagvad Gita, the Quran, the Bible, literature on Buddhism and Jainism have also found a place in the library.

Malekar, who hails from Pune, answers the door to let a couple from the US in. Hundreds of tourists visit the synagogue every month, he says. Ana Birnbaum, a visitor, says, “I am Jewish. We make it a point to visit the synagogue at every place we visit. We went to the one in Mumbai as well.”

Delhi is home to about 10 Jewish families and most of its Jewish population is floating. In addition, about 100-150 diplomats from Israel, US and UK visit the synagogue, Malekar says. Every Friday, about 20-25 people attend the Sabbath service.

Malekar, who has performed at least 15 interfaith marriages, says, “I tell people that they should first read scriptures and understand their own religion before wanting to convert to Judaism. I am against conversions.” He says that the most recent interfaith marriage scheduled at the synagogue was that of a Bengali bride and a Jewish groom from France.

He says there are about 5,000 Jews in India, of whom 4,000 live in Maharashtra. “The Mahara-shtra government has recognised the Jewish community as a minority but we still need to pursue our case for minority status with the Centre,” he says.