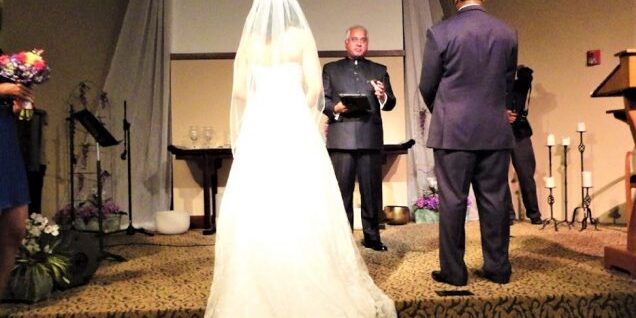 Interfaith Marriages, a Washington-based wedding officiant service, led by a prominent Indian American Muslim Mike Ghouse, has been recognized as a winner of the 2022 WeddingWire Couples’ Choice Award.

Dr. Mike Ghouse, an author, and head of the Center for Pluralism is a member of the American Marriage Ministries, specializing in marrying couples of different religions. As an advocate of interfaith harmony and inclusion, Ghouse believes in curating a meaningful experience for all couples who are committed to one another.

“Marriage is the most important milestone of your love relationship; indeed, it expresses a commitment to the connection between you two,” he said in an interview.

But interfaith marriages are sometimes a contentious issue among South Asian families, especially in view of the family and societal traditions that immigrants cherish but suddenly find in conflict with what their children, who grow up in a multicultural environment, the one they experience and follow.

Ghouse, however, views things from a holistic perspective, especially because they relate to the lives of couples.

“When you take the bold step to become one regardless of your origins, faiths, races, cultures, and ethnicities, you must be appreciated and applauded. You are setting a new standard on how to live in harmony despite your inherent differences. You are practicing genuine pluralism, i.e., respecting the otherness of the other and accepting the given (God/Nature) uniqueness.”

Perhaps, the most important decision for immigrant parents to make is to reconcile their ideal of molding children into their image with the aspirations of their children.

Mike Ghouse acknowledges the tension that arises and says he understands how parents and families from South Asia feel but there is the other side to the picture.

“I know many Desi (natives of India and Pakistan) American parents go through a difficult time when it comes to the marriage of their children.  Unlike the young men and women in India where parents arrange their marriages, in the US, the children find their own mates.”

But, Ghouse, says reconciling traditions with new realities is something that families should be ready for.

“What is good about our kids is they don’t have filters like religion, nationality, race, or ethnicity, they rightfully fall in love and look forward to marrying their sweetheart.”

As a facilitator of a positive intercultural interface, Ghouse takes an open approach to ceremonies. He blends each partner’s traditions, whether they are Muslim, Jewish, Christian, Buddhist, Hindu, or non-religious.

“This is to help couples and everyone in the family feel that each and every individual’s cultural traditions and religious beliefs are sacred and demand respect, that is the way towards mutual acceptance and a happy union.”

Describing the outcome of such marriages he says several of them went smoothly, but some of the parents were adamant that they will not accept a Hindu boy, Muslim girl, or a Jewish, Christian, or Sikh spouse.

“This happens even with single or divorced adults in their 40’s and 50’s. But in every case, we had a fruitful conversation, and finally, everything comes together for the happiness of their children.”

“In some cases, parents on both sides, make subtle to blatant efforts to ask the bride or the groom to convert to their faith. They pursue this relentlessly no matter how many times their kids say No to them, then finally they beg to at least have their name change to suit their faith.

“But I have also seen people who accept things with an open heart.”

Ghouse says once a marriage solemnizes two souls, it is the duty of their friends and families to help the couple. Otherwise, tensions add to difficulties for everyone.

“Marriage is between two individuals, and their families and friends ought to be supporters and cheerleaders to celebrate and complete their joy. When we officiate a wedding, we work with the couples and the parents to ensure the wedding goes smoothly and everyone is on the same page, that is to cheer the couple.”