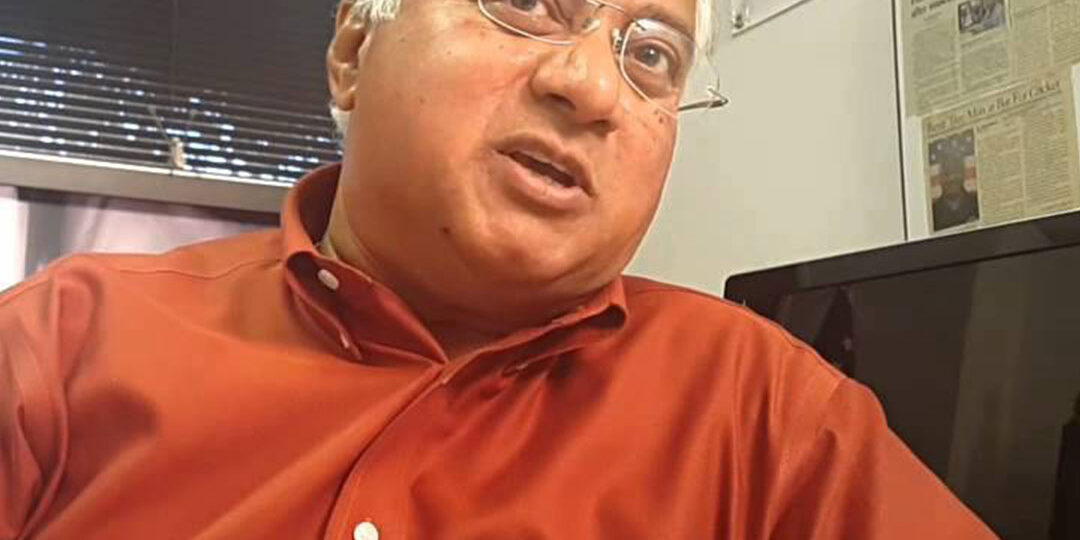 Cohesive mankind, cohesive Ummah and cohesive America are what Mike Ghouse stands for. Irrespective of what people think about him, he is marching ahead on his peace mission with messages of love and respect for all individuals, all races and all communities irrespective of their identities — personal, religious, social, cultural or national. His fame has taken him to all the corners of the earth. He is a regular fighter against Islamophobia in America, and is specially active in building relationships in various religious groups, especially Muslims and Christians of America. His work assumed huge significance in the wake of 9/11, which witnessed massive pluralisation in American society. He has been on thr forefront of leading the confrontation against hate-mongers and mischief makers. He is often criticized by Islamic scholars for taking a rather liberal view of Islamic teachings and for trying to conform Islam to the demands of Western societies, but unfazed by the opposition, he has kept his mission going with increasing support from all groups. Those who know him well understand his strategy, which is primarily aimed at generating good will and initiating dialogue for the purpose of mutual understanding and tolerance. He has been a vocal critical of America’s war in Iraq and also played a prominent role in the campaign against those who were against the building of a mosque in the Manhattan.

Mike Ghouse is mostly known as a believer and a proponent of Pluralism, i.e., respecting the otherness of others and accepting the God given uniqueness of each one of us. He offers pluralistic solutions on issues of the day on TV, Radio, Print and Internet.

An American of Indian origin, Mike is a man of action. The action emanates from his dream, “a dream that one day in our life time; we all will wake up to a cohesive world, where no human lives in tension, apprehension or fear of the other. Indeed, that was the dream of all the spiritual masters of the world, and that is what the creator wants; all pieces of his creation to function coherently.”

Explaining his position as an activist, he says:

“Nothing in the universe will happen by itself, all of us have to do our share of the work to restore the harmony within our self, with our bodies and with people around us. Don’t you think God knows this? Yet through every religion, we are told to ask for it.

Our founding fathers believed, “That all men are created equal, that they are endowed by their Creator with certain unalienable Rights, that among these are Life, Liberty and the Pursuit of Happiness.” And that dream was refreshed by Martin Luther King, Jr.”

Mike is always on the move. He is always available to speak to all groups, conduct workshops on building cohesive work places and living a meaningful life, and move towards living in harmony. A powerful speaker, his fame has shot with his appearances in Fox News, Syndicated Radio shows, Dallas Morning News, Huffington Post, and a variety of News Papers in America and abroad for giving him. This has given him a strong National and local presence. Mike has appeared in over 100 shows on Fox News and over 50 times on nationally syndicated radio shows.

He has written nearly 3000 articles, and bulk of them are published in Dallas Morning News, Huffington Post, New Age Islam, Op-ed News , Arab Daily News, Arab News, Saudi Gazette, and several other News papers and periodicals around the world. Of the 2800, 1000+ were on Islam, 1000+ on Pluralism and the rest were on politics, India, Pakistan, Israel-Palestine, Motivational and other topics.

Currently Mike is working on making a film based on a compelling true story of building a cohesive America, and writing a book on human rights — “Standing up for others”- standing up from Atheists to Zoroastrians and every one in between.

God has blessed him with an aptitude for mitigating conflicts and nurturing goodwill in everything he does, that is think, talk and act, and he has been a life time volunteer, and it is a joy to maintain a healthy balance between earning a living and serving the public.

He has spoken at international forums including the Council for a Parliament of the World’s Religions, in Melbourne, Australia, Middle East Peace Initiative, in Jerusalem, the International Leadership conference, in Hawaii, and in Washington, Many Universities including SMU, Rice and others, World’s Philanthropy organization’s annual conference in Washington and elsewhere.

He is a member of the Texas Faith panel at Dallas Morning News and writes on issues facing the nation every week and offers pluralistic solutions. He writes regularly at Huffington post, Op-ed News, Arab Daily News and several other papers worldwide.

Mike was a commissioner at City of Carrollton, and president of many a organizations including North Texas Cricket Association, Indian Creek Home owners Association, and Dallas Fashions for Charity etc. A founding member of the board at Memnosyne Foundation, and board of director at Dallas Peace Center, Dallas Home Builders Association and several other organizations.

God has made him an instrument in establishing several annual public events to bring Americans of different religions, ethnicities and races together on common grounds of building a safe, secure and a cohesive America, among them are Unity Day USA, Holocaust and Genocides, Thanksgiving Celebrations. We have and plan to hold workshops and conferences on issues like religion, racism, Anti-Semitism, Islamophobia, LGBT, gender pluralism and other issues.

Concerned by the political, civil, religious, racial, sexual orientation and economic divisiveness, Mike has initiated and formed the America Together Foundation (ATF), a non-profit entity committed to building a cohesive America, where no American has to live with anxiety, apprehension, or fear of the other. The focus of the foundation is that ‘one must be free to live his or her life to the fullest’.

He firmly believes in our immortal declaration of independence. “We hold these truths to be self-evident, that all men are created equal, that they are endowed by their Creator with certain unalienable Rights that among these are Life, Liberty, and the Pursuit of Happiness. That to secure these rights, Governments are instituted among Men, deriving their just powers from the consent of the governed.”

He believes in Conflict mitigation and goodwill nurturance that Prophet Muhammad (pbuh) chose in dealing with issues of the day, and he has successfully employed that ideal in dealing with Pastor Robert Jeffress of Dallas who denigrated Quran, which led to a Quran conference in creating goodwill among non-Muslim clergy. The conference details are at www.QuraanConference.com

When Pastor Terry Jones announced burning 3000 copies of Quran, Mike was out there in Florida and gathered up the civil, political and religious leaders to peacefully offer prayer as an alternative instead of burning Qurans to avenge the 9/11 Victims. A message was sent to the world that freedom of speech is an important American value and respecting what is sacred to others is an important value as well. A movie is being considered that will change the perceptions about Muslims and change within Muslims in dealing with the conflicts. Full story is at: Worldmuslimcongress

Mike was further involved with the conflicts at the Ground Zero Mosque, Peter King Hearings and other conflicts, and had offered pluralistic solutions. There is a blog for each one of these conflicts.

As much work as he has done with interfaith communities, he has a strong presence in the intra-faith dialogue as well. Having moderated two major intra-faith conferences at Rice University and in Dallas, and two Sharia conferences were held to allay the Sharia Phobia. He has prayed in all mosques, and wrote a blog on Ramadan sharing the practices in each tradition. There is a blog for it — www.RamadanExclusive.com

Mike started the Radio for Desi community in Dallas in 1996 with three hours on Saturdays, and passed it on to others, and now we have three 24/7 Radio Stations in Dallas. It was always loaded with interfaith programs. Mike ran a program called wisdom of religion, all religions for two years — where 520 Hours of Radio talk was done

Mike is a human rights activist, and his book standing up for others will be out soon. He is also producing a feature film “Sacred” to be released and a documentary “Americans together” to be released in the next few years.

All about him is listed in 63 links at www.MikeGhouse.net and his writings are at www.TheGhousediary.com — Mike is committed to building cohesive societies and offers pluralistic solutions on issues of the day.

He was the deputy finance controller for Fluor Corporation in Saudi Arabia (1977–1981). Fluor was the largest Petro Chemical Engineering firms in the world then.

He was vice president of Lewis Fire Equipment, one of the largest fire protection companies in Texas.

He was successful in turning around the company to profitability (1981–1983).

Americans together are committed to building a cohesive America, where no American has to live with anxieties, discomfort of fear of the other. We have the systems and programs in place to work towards building cohesive societies.www.AmericaTogetherFoundation.com

Key programs to bring Americans together and build bridges

Our mission is to encourage individuals to develop an open mind and an open heart towards fellow beings. If we can learn to respect the otherness of others and accept the uniqueness of each one of us, then conflicts fade and solutions emerge. It’s 20 years of work on religious, social, cultural and political pluralism involving 26 workshops in understanding religion, every beautiful religion; 520 hours of radio talk shows learning about the wisdom of every faith; writing and sharing the essence of the festivals of the world and nearly 750 Articles on Pluralism, and over 150 of them published at Dallas Morning News and nearly 100 at Huffington post and several TV and Radio appearances.

We are committed to nurturing the pluralistic ideals embedded in Islam. To be a Muslim is to be a peace maker, one who consistently seeks to mitigate conflicts and nurtures goodwill for peaceful coexistence of humanity. God wants us to live in harmony with his creation; Life and Matter

Texas Faith Panel, Dallas Morning News. Mr. Ghouse is a member of the Panel and writes about interfaith issues facing the nation every week. He has written close to 150 pieces over the last four years and almost every column he writes, weaves through the essence of many religions.

Mike has initiated, organized and established the following events. In each one of the events, we the people ofthe United States of America of every faith, race, ethnicity, culture and background come together to express our commitment to co-existence, unity, safety and well being of our nation.

Annual Unity Day USA is a main stream event commemorating 9/11 for ten years. The UNITY DAY USA has become a symbol of unity among Americans. It is an initiative to come together to stand up for the safety, security and cohesiveness of America. Every year we recognize five individuals who have made a difference in their communities, the trophy calls them pluralists in their field.