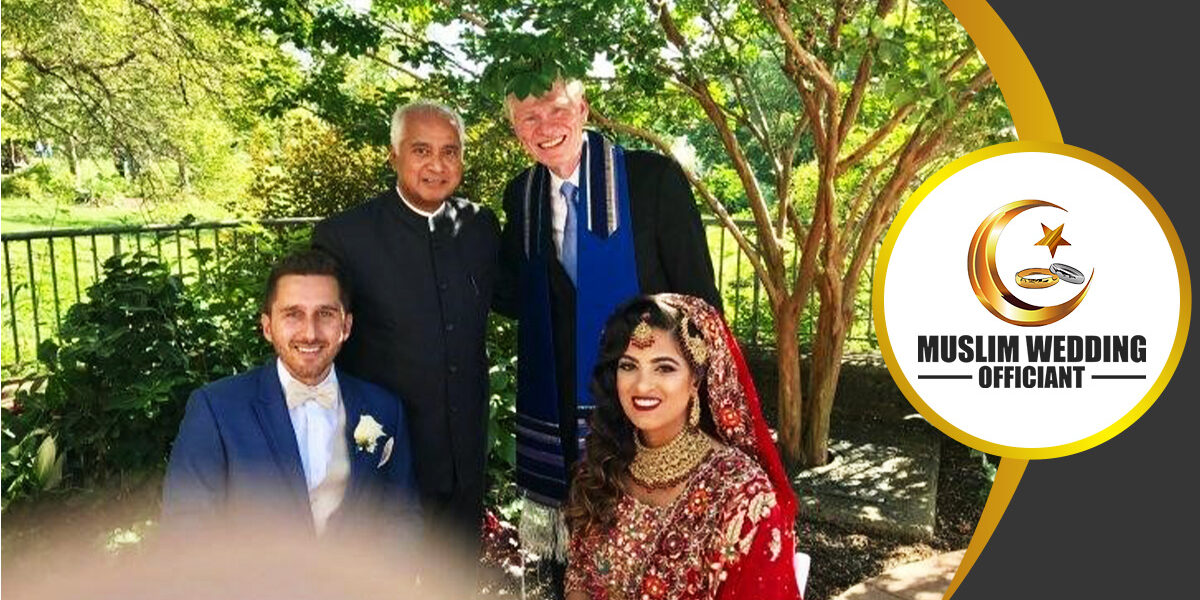 We Officiate Muslim and Interfaith Marriages

Allah is the Arabic word for God. He is the Rabbul Aalameen (Quran1:2), the universe’s causer, maintainer, and recycler. He installed the love chip in individuals as if it were a GPS implant in every human being, bringing two souls together. That is you and your fiancée among the 7.5 billion people. Quran 30:21, (30:21), Safi Kaskas, “And among His signs is that He created spouses for you from among yourselves, so that you may find peace with them, and He has placed affection and mercy between you. In this, there are signs for people who think.”Dr. Mike Mohamed Ghouse regularly officiates the Nikah Ceremonies and will travel within the United States when his schedule permits. As a part of his service to the community, he officiates interfaith marriages and believes that God puts love between two individuals and brings them together. When two individuals fall in love, the ultimate milestone in their relationship is marriage. Mike has officiated weddings between Muslims, Hindus, Christians, Jews, Atheists, Jains, Sikhs & Buddhists. Through consultations with the couple, he customizes the proceedings and sermons in both their faith traditions if they choose to remain in their respective faiths. If one decides to become a Muslim out of free will, the conversion ceremony will occur minutes before the wedding. Counseling is also available in handling conflicts that may arise out of different religious & cultural practices.

Ghouse has written a well-researched 5000 words chapter, “Can A Muslim Woman Marry a Non-Muslim?” in his book America Muslim Agenda, available on Kindle & Amazon. He also manages a think tank called World Muslim Congress.
Ghouse is the founder & President of the Center for Pluralism, an organization committed to building cohesive societies where every human feels secure in their faith, religion, race, ethnicity, culture, sexual orientation, and political orientation.
He is also a public speaker, thinker, author, community consultant, pluralist, activist, and newsmaker. He is deeply committed to free speech, human rights; pluralism in religion, politics, societies, and the workplace. He has dedicated his life to building a cohesive America & offers pluralistic solutions to the media and policymakers on issues of the day.

Compatibility is the bottom line for all marriages, but societies wrap religion around it to prevent marriages between two people in love.
Most societies are hypocritical; they let their boys marry women from other groups but don’t want their women to marry men from different faiths, races, and cultures. They throw religion and caste (in the case of India) in their face to prevent the wedding, be it Jewish, Hindu, Christian, Muslim or other.
Do you have a problem with what I eat or drink? What clothes and head covering do I wear? Whether I believe in one God, no God, or many representations of God? What is your loss? Then what is your loss if I marry a Muslim, Hindu, Christian, Jewish, or a woman from any tradition? What is your loss?
There is no reason or rhyme for why people fall in love. One of the several explanations is that God places a GPS in each individual, which brings two individuals together. We are programmed to be free and pursue life, liberty, and happiness.
God wants his creation to live in harmony and peace, and God does not place any restrictions. Most of the limits set in other societies don’t work in America. It is the land of the free and the brave, and those traditions mean good but should not restrict the couple from being happy and living in harmony.
It has been a joy to officiate marriages between people of different faiths, almost every faith except the Zoroastrians and Native Americans. It will happen someday.
This month, I will complete officiating 212 weddings over 12 years; indeed, a few Hindu-Hindu and Muslim-Muslim Nikah’s are a part of it. This year I have traveled to Idaho, Denver, Kansas, Tennesse, Texas, New York, Florida, California, and of course, here in VA, MD, and DC, and looking forward to going to Illinois, Georgia, Massachusetts, Missouri, and other states.
I am happiest to see my vision of America where all Americans meet each other without any religious, cultural, social, or other filters.