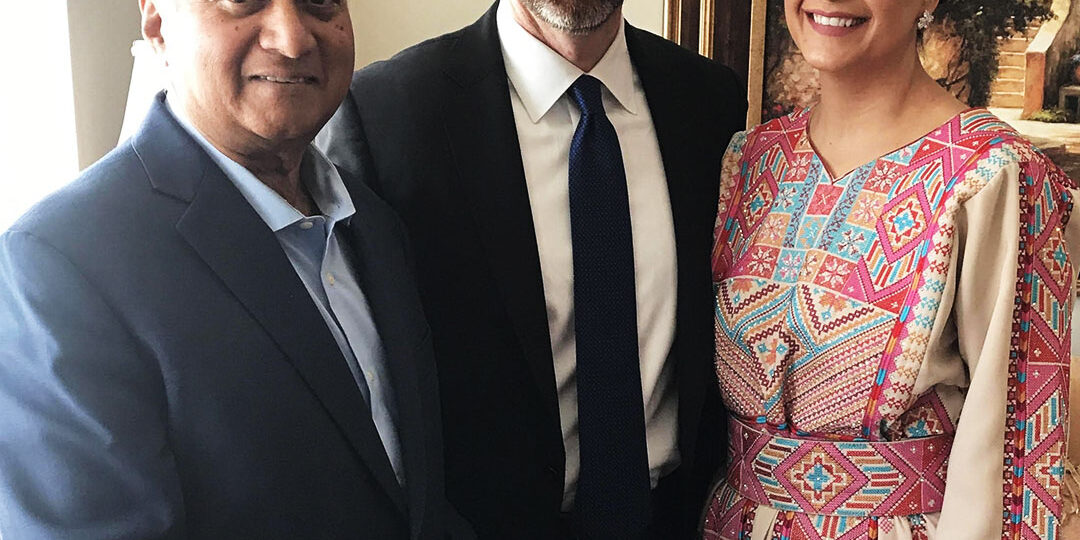 In a pluralistic society like the US where all the religious beliefs and cultural traditions enjoy freedom and equality, interfaith marriages have become a culturally accepted norm. However, in an interfaith marriage, the couple faces the dilemma over how the wedding ceremony should be held as customs and rituals involving marriage are different in different religions and the parents and relatives of the couple don’t want to miss out on the joys and sense of completeness on observing the cultural and religious customs during the wedding ceremony.

Mike Ghouse is well known for his contribution to the promotion of interfaith harmony and pluralism. He has written about 3600 articles in more than 300 newspapers around the world. He has appeared on national TV, including Fox, over 300 times, and has been on Nationally Syndicated Radio shows over 150 times. His book “The American Muslim Agenda” has received rave reviews and his books, “Standing up for others” and “Pluralism in America” is on the anvil.

Since Mike Ghouse has been passionately promoting interfaith harmony and pluralism in America, officiating interfaith marriages is the most effective way of promoting it because when a man and woman belonging to two different religions marry and come together for life, it strengthens the cultural bond. By officiating hundreds of interfaith marriages since 2009, he has brought together hundreds of couples from different religious and cultural backgrounds.

Mike Ghouse has officiated religious, secular, and interfaith weddings in every combination with Atheists, Buddhists, Christian, Hindus, Jains, Jewish, Muslims, Sikhs, and others. Since 2010, he has officiated over150 weddings. Mike has also officiated many Muslim-Muslim weddings.

He is licensed in all 50 states of the United States and travels from Washington DC to any destination.

About the procedure of these interfaith weddings, he says:

“The wedding proceedings include partial to complete sermons from both the Bride and Groom’s religious traditions to the extent the couple prefers. If the couple chooses, we will incorporate the parents’ customary rituals as well. It is very common with Desi couples. Secular weddings may or may not include invoking the name of God depending on the preference of the couple.”

Mike Ghouse believes that interfaith couples contribute more to the promotion of peace and harmony because they help remove misconceptions about different religions and bridge differences. Therefore, their decision to marry across faith is a bold and inspiring step.

And he takes pride in being a part of this bold initiative. He says, “I am blessed to have officiated secular and religious ceremonies of both the couple’s traditions with their respective input and final approval. Whether it is Jewish-Christian, Hindu-Christian, Bahai-Jewish, Hindu-Jewish, Atheist-Jain, or other combinations, the Bride and groom and their families feel elated and enjoy the sense of marriage in full.

As a Muslim, it has been my pleasure to have officiated weddings for Muslims in various combinations; Muslim-Christian, Muslim-Jewish, Muslim-Hindu, Muslim-Mormon, Muslim-Sikh, Muslim-Jain, Muslim-Buddhist, Muslim Atheist, and Muslim-Muslim. By the way, individuals marry each other and not religions.”

He further says, “God (or nature if you prefer) wants nothing more than harmony in his (its) creation. Because he created everything in balance, he expects us to preserve or restore it when it is off. However, he did not program us how to relate to each other and live with each other. He gave us complete freedom to chart our own course of harmony with the other. God is happiest when two people can rise above their differences and live in harmony.”

While organizing an interfaith wedding, he keeps in mind all the requirements and cultural and religious aspects of the event so that it becomes a memorable experience for the couple and their families. To make the ceremony complete in all respects, he has a detailed list of proceedings which is as follows:

The initial conversation with the Wedding Officiant Dr. Mike Ghouse

A 25 points Questionnaire follows, to design the wedding proceeding.

A conversation about handling the differences.

Dealing with raising children (if at all).

A draft outline of the ceremony will be prepared by the Officiant.

The couple will review and modify the outline at least three times.

The officiant will perform the wedding per the agreed outline.

The wedding will start on time and close on time.

The Ceremony will be based on the process worked out between the couple and the officiant, and it varies from couple to couple. Interfaith greetings to include people of different faith traditions. Appreciating the bold steps, the bride and groom have taken. Observing customary traditions of either or both Bride and Groom.

Acceptance of each other as his/her spouse.

Pronouncement as husband and wife

Prayer (again from one or two traditions).

Other rituals that parents desire, or the couples want can be included.

Today hundreds of interfaith couples are living happily and in harmony thanks to the services provided by Mr. Mike Ghouse. They acknowledge and appreciate the efficiency and sensitivity with which Mr. Ghouse has officiated and organized their wedding. This gives him a great sense of achievement.

Therefore, he says: “As a Pluralist, I have chosen to officiate the weddings of such couples to reflect the essence of the Bride and Groom’s religious and cultural traditions. I laud such couples who embrace genuine humanity by respecting the otherness of others and accepting each other’s uniqueness. If the couple prefers to give that little extra joy to the religiosity of their parents, relatives, and friends, the sermon would include reflections and the essence of the faiths of the couple.

I am blessed to have performed some uniquely beautiful combinations of weddings from different faith traditions. It was such a joy to see their families and friends cheer at the end and appreciated learning the essence of both the traditions in a few minutes.”

In fact, organizing interfaith marriages has become his mission. His mission is to open people’s hearts, minds, and souls toward each other. The idea of Pluralism drives him. He says,

“If we can learn to respect the otherness of the others and accept the God-given uniqueness of each of us, then conflicts fade, and solutions emerge.”

Indeed, this is his definition of Pluralism and he finds the fulfillment of God’s message of peace and harmony in interfaith marriages.